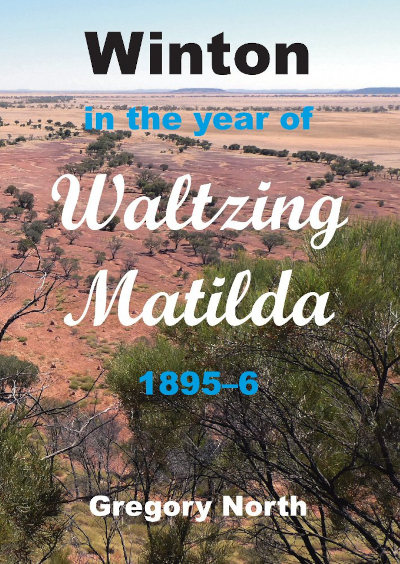 What did the newspapers have to say when solicitor and poet Andrew Barton “Banjo” Paterson visited Winton, Queensland in the 1890s? During his visit, he and Christina Macpherson created what became Australia’s best-known song – Waltzing Matilda.

Through contemporary newspaper reports, the book paints a picture of the Winton district of 1895–6. You’ll meet the locals in a thriving, progressive community that experienced its highs and lows.

At the time, building was brisk and improvements were being made to public buildings; the season was good and stock movements were numerous; land was being opened up for selection and the opal fields were creating interest. There were musical and dramatic entertainments in town; the mysterious dog poisoner was at work; the hotels and courts were busy, although the churches weren’t and the Salvation Army were persistent in their efforts to convert the sinners. Rain created havoc on the roads and delayed the mail and floods had tragic consequences.

Fresh memories of the shearers’ strike of 1894 created an underlying nervousness as the 1895 shearing season approached but there was also great excitement and a communal sense of accomplishment when the long-awaited Winton artesian bore was completed. The prospect of town water was on the horizon and the approval of the Hughenden–Winton railway was met with great jubilation.

Read all about it!

The book is A5 size, soft cover, 370 pages with an extensive index and list of residents mentioned in newspapers or the Government Gazette of 1895–6. There’s also a poem by “Banjo” Paterson and one by Greg too!